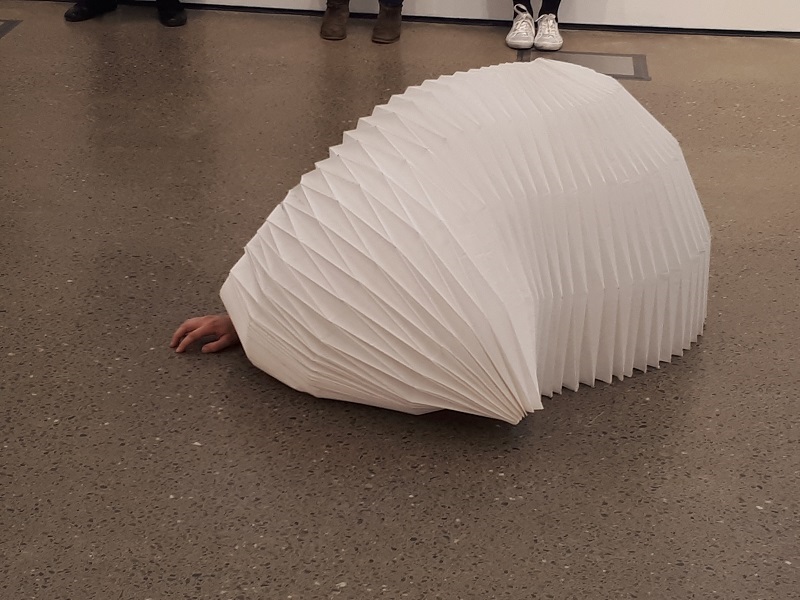 The following images are of a series of origami inspired paper works the I made in collaboration with Choreographer Luke Murphy, who invited me to be part of the project. It was exciting to see these works so sensitively animated by Luke and his amazingly talented team! 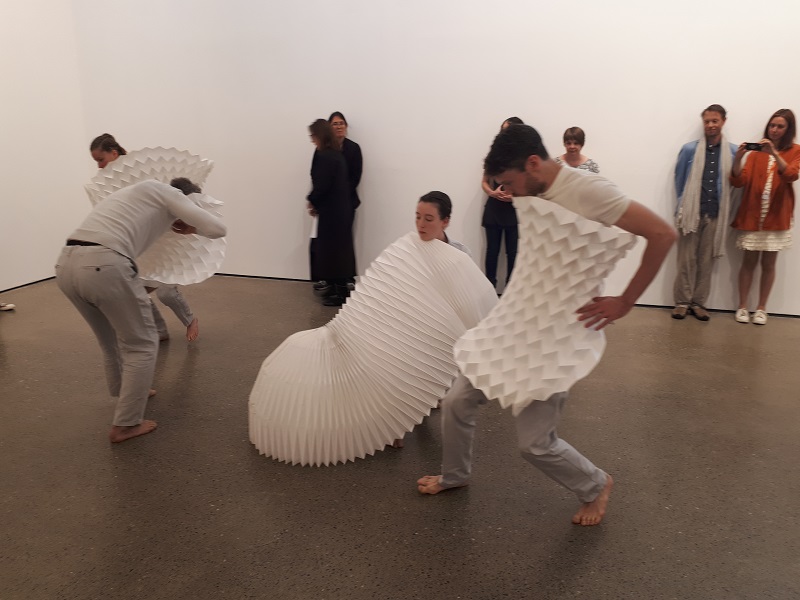 A still from the inaugural performance of Carnivore at Uillin: West cork Arts centre. 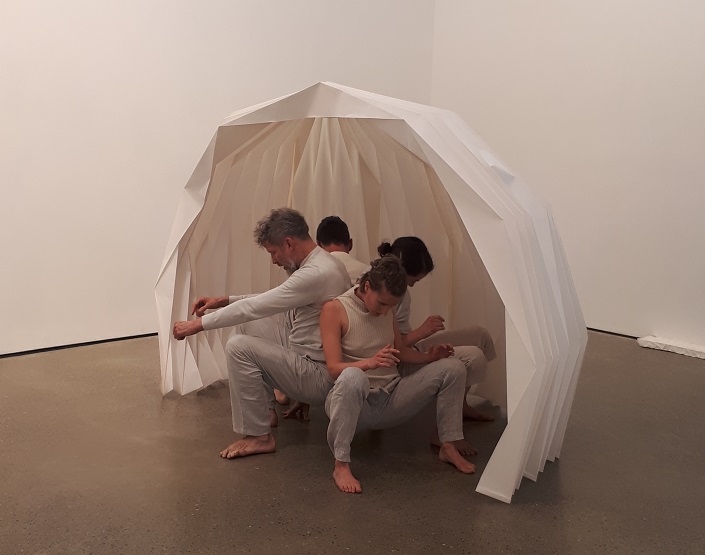 The large paper dome became the spiritual home for the performers during each performance so I called it Duomo, the Italian for church. This dome also unfolded to become a tunnel and was folded from 45 square meters of paper. After the final performance in the Centre for Contemporary Irish Art, Los Angeles, I am told it now lives somewhere in New York.

This is a sample of some new work in paper that I exhibited at Rudolf Heltzel Design during Kilkenny Arts Festival, Ireland, 2014. The following images show a work in progress… This piece is a stellated dodecahedron developed from a star fold I created for an earlier large scale paper installation. Using the basic geometry of a 12 sided solid I was able make the spherical form after I had worked out the development. Though not strictly origami as it uses tabs and glue, I wanted the work to be folded from a single sheet of paper. Compared to final assembly, working out this development was half the fun! (Or should I say work)? 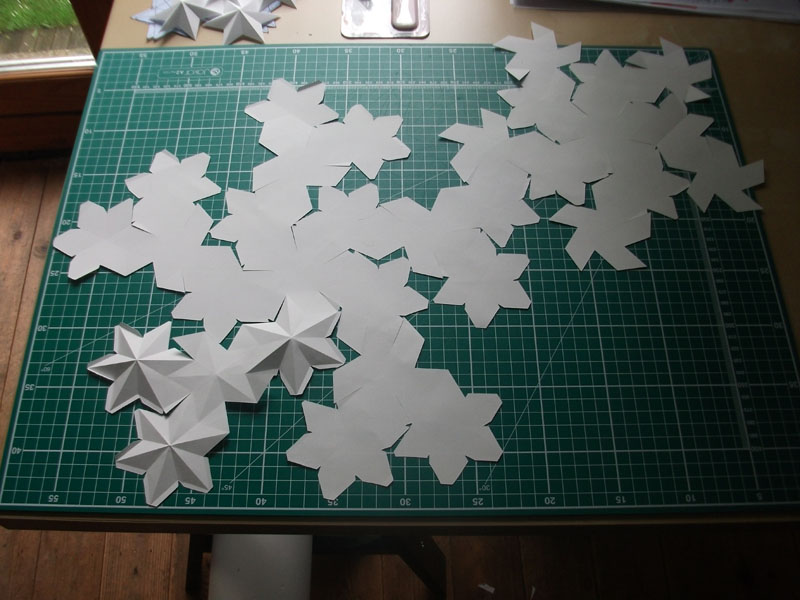 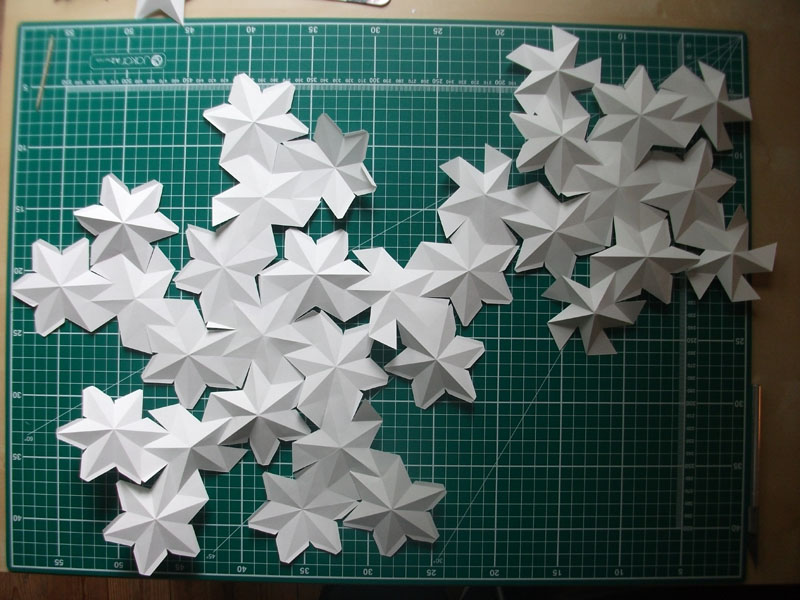 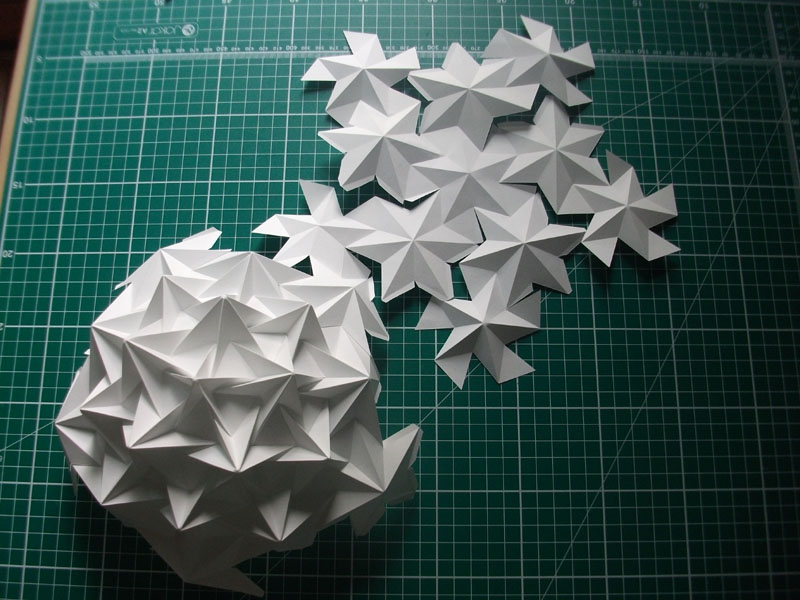 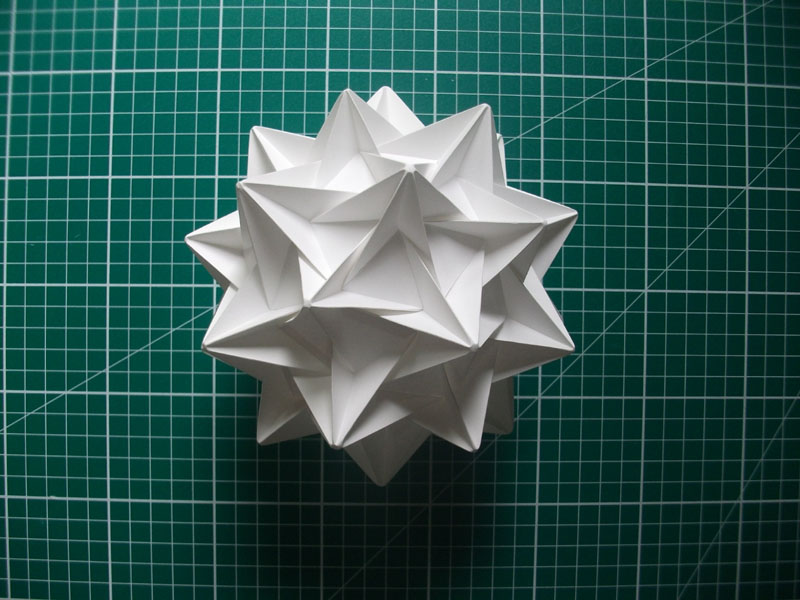 The completed piece… more to follow. I have been a big fan of Heltzel’s fine jewelry for a number of years, and I visit his studio whenever I am in Kilkenny. When a conversation with Rudolf’s son Christopher ended in my being invited to exhibit some new work, I wanted to respond to the precision of his fine work in the medium of paper on an intimate scale… 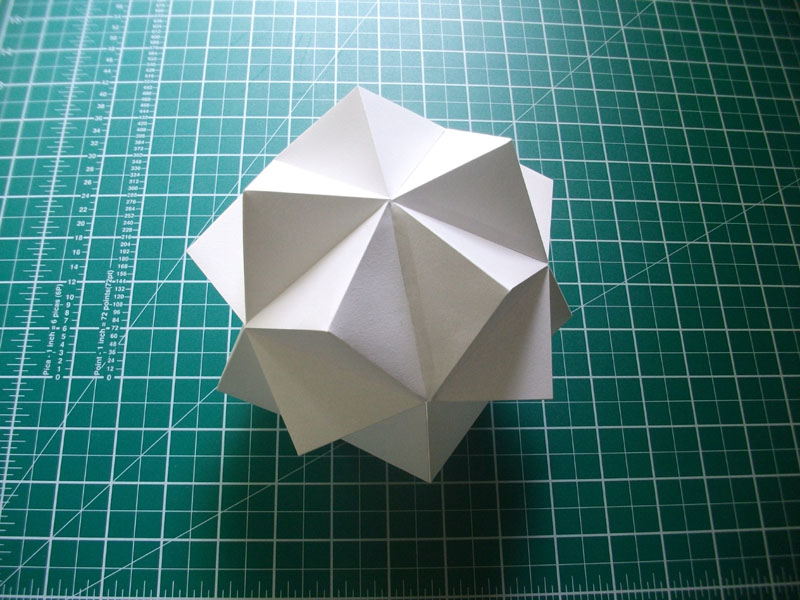 Stellated Icosahedron. Folded from a single sheet, working out the crease pattern for this was very satisfying! I have also included this crease pattern for printing on A4 paper below, which is my first ever origami / paper sculpture diagram.

Instructions: Crease all diagonal mountain folds and also the horizontal and vertical valley folds (including gluing tabs). Create the 20 three-sided pyramids first by gluing along the folded edge. Then glue each tab behind the nearest edge to create the shape. (I use super glue precision gel which does not stain the paper). 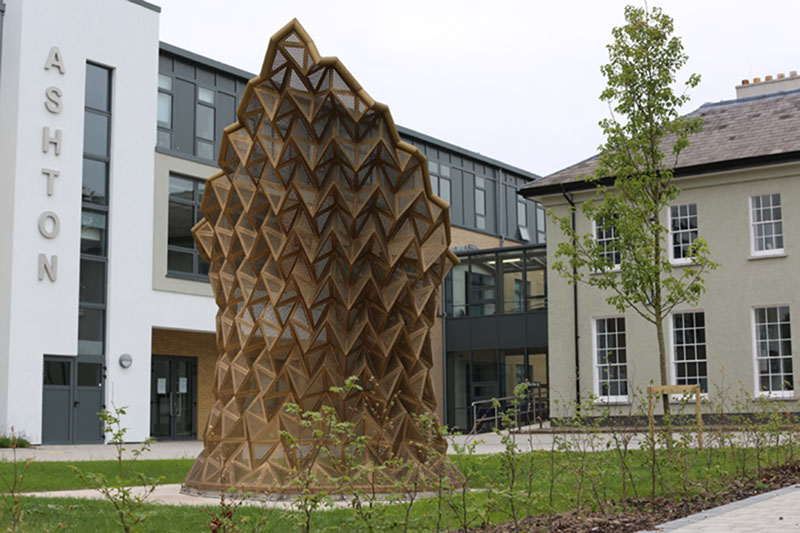 This idea for Ashton School, Cork, Ireland is my site specific response to the location within the new school and the relationship between the new and old school buildings. As I aimed to link the subjects of art, maths and science, the image of a leaf or flower came from my discovery that the original old building was once a leaf covered Georgian family home that had large green houses and planting on 20 acres of grounds. 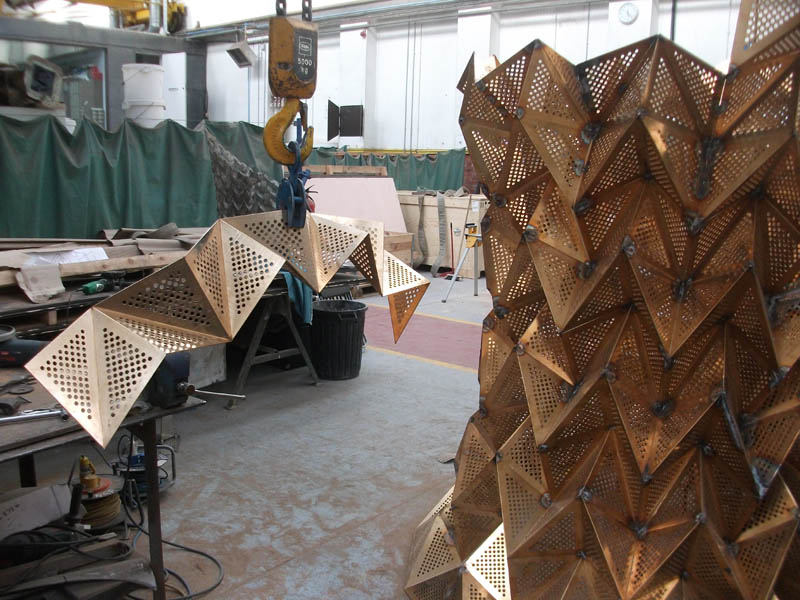 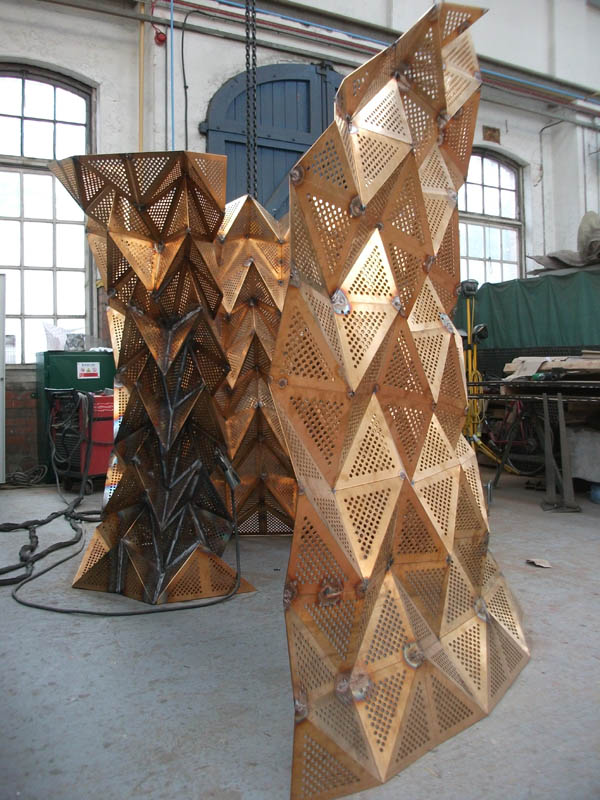 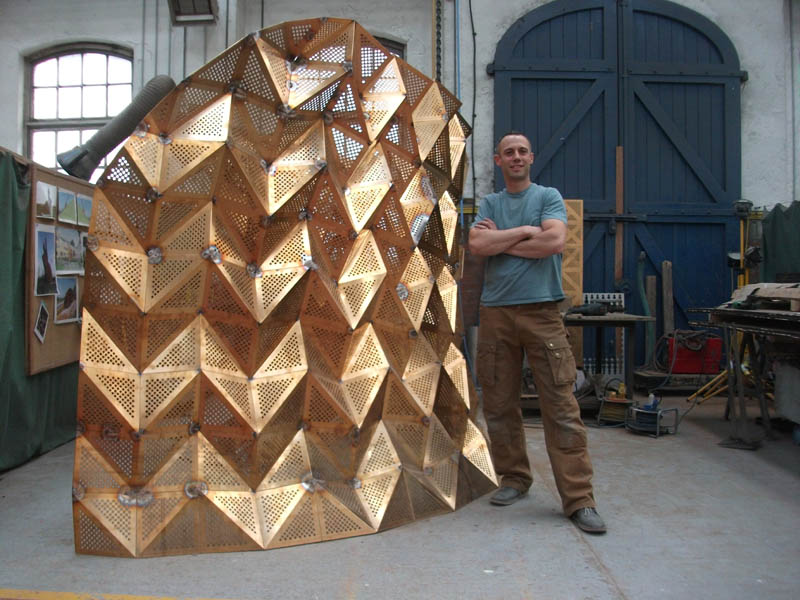 This idea was selected for Longford City By-Pass, Ireland, and represents the upper portion of a giant 20m long violin or fiddle as if it has been partly unearthed by the newly cut away embankment. 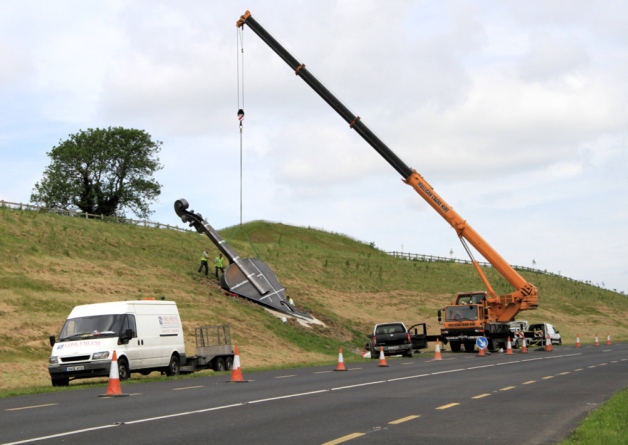 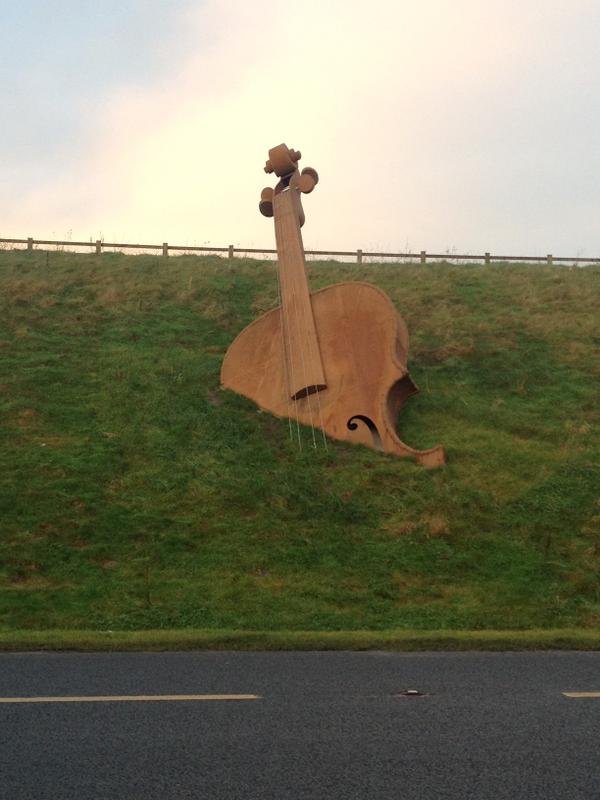 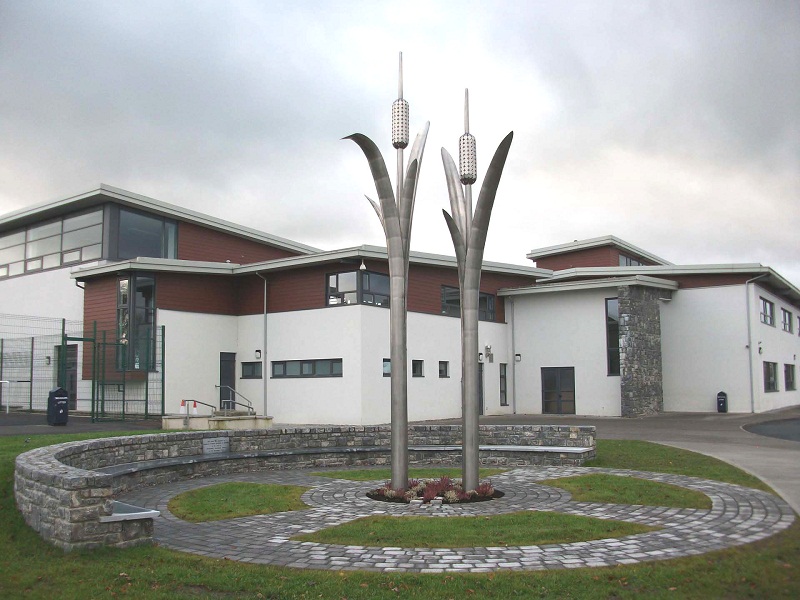 Bulrushes is a piece I made in 2013 for Glenamaddy Community School, Co. Galway, Ireland. The idea was inspired by the surrounding bog land which I discovered is recognised both nationally and internationally as an important untouched wetland environment. The theme of water is also reflected by the circular grass and stone amphitheatre and landscaping which is also a part of my design The work is made from brushed finish stainless steel with a series of low wattage LED lighting elements to give a subtle glow at night. There is also a carved stone element at the school entrance. These images are of the work in progress and also during installation… Special Thanks to Raymond Riley, whose help and expertise made this project possible. 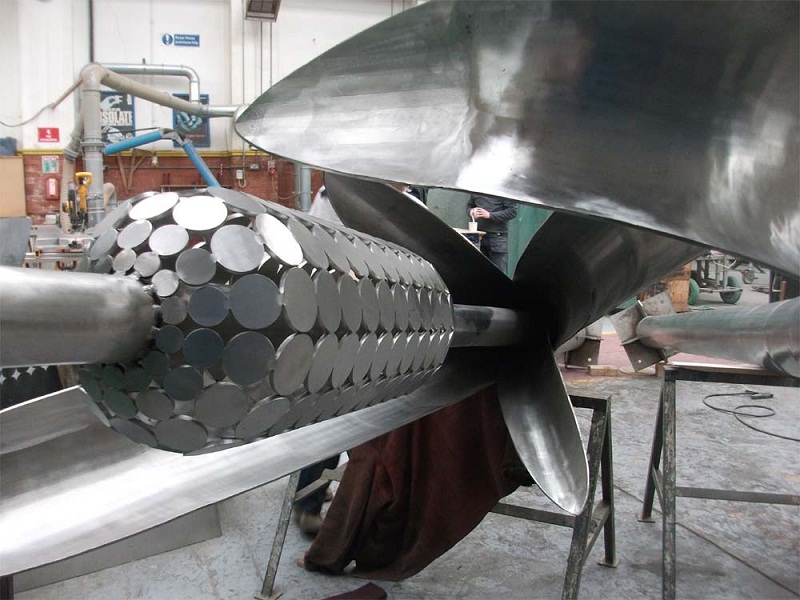 Work in progress at the National Sculpture Factory, Cork…

The following images show the construction of Rabbit (inspired by the origami rabbit created by David Shall)  at the National Sculpture Factory, Cork, Ireland. This was made from plasma cut 6mm corten weathering steel and MIG welded with continuous welds. 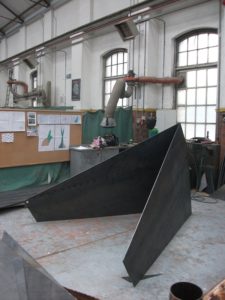 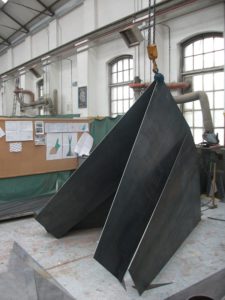 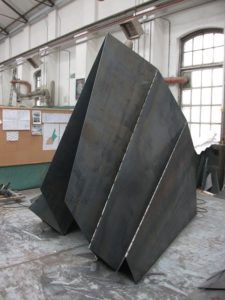 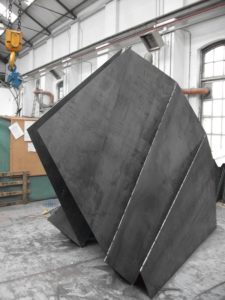 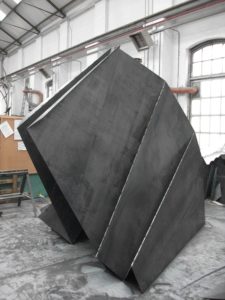 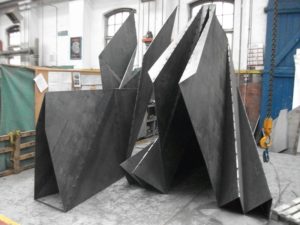 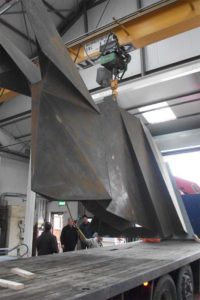 Moving the four and a half ton Rabbit at the National Sculpture Factory with Factory Floor Manager Donal Dillworth. 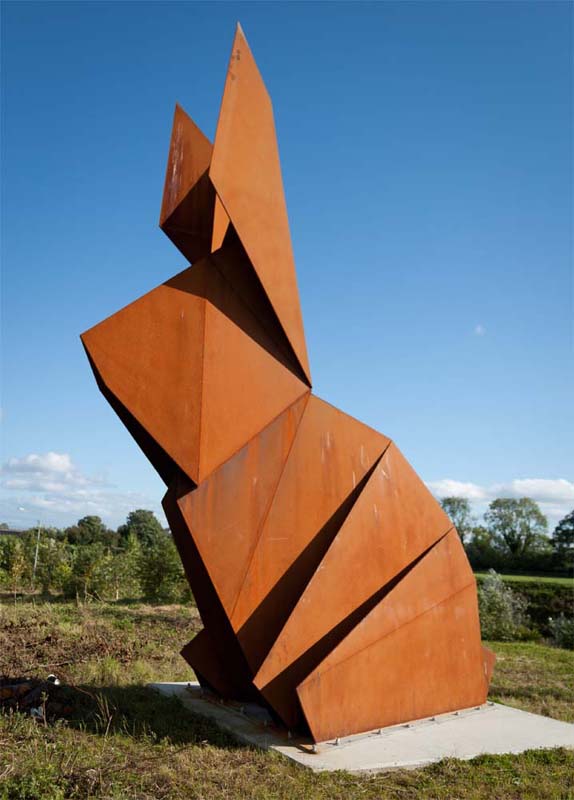 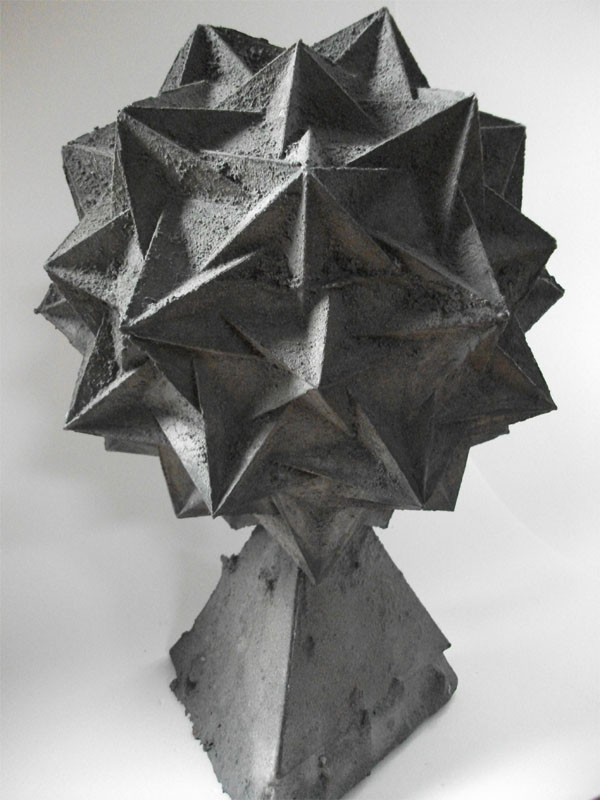 This piece, titled Gravity is a development from an original star fold pattern I created for a paper installation I exhibited in 2011. By using a mixture of computer modelling and origami test pieces I was able to make the fold pattern into a sphere based on the geometry of a dodecahedron.  This was then cast from the paper original during IRON-R cast iron workshop at the National Sculpture Factory in 2012, led by artist and CIT Crawford College of Art & Design lecturer James Hayes. The piece now weighs 100 lbs and stands 36 cm tall. 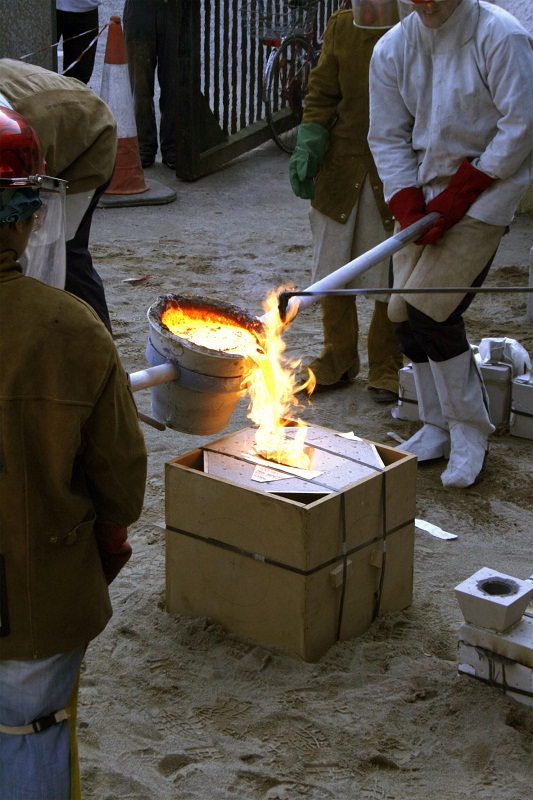 …The work being cast by the Iron-R team in the Sculpture Factory yard using a sand mold with wooden casing around the paper original, which you can see being burned out during the pouring. The specially made furnace nicknamed ‘The Bull’ reached 3000 degrees Celsius which gave off U.V. light from the viewing holes!